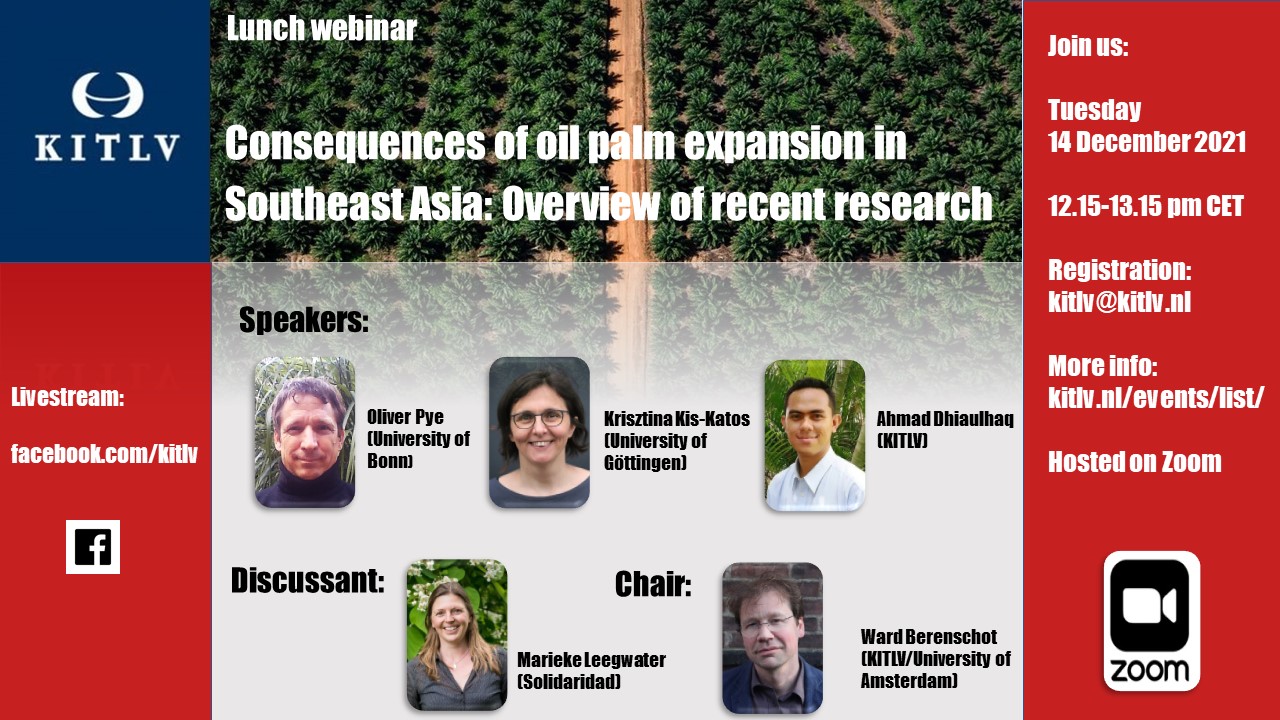 The rapid expansion of oil palm plantations across Southeast Asia is triggering equally rapid environmental, economic and social transformations. As the size of plantations is doubling nearly every decade, rural Southeast Asia is facing considerable challenges: not only do countries like Indonesia, Malaysia and Cambodia face an uphill struggle to protect remaining forests, but they are also confronted with widespread land conflicts, appalling labour conditions and a rapidly changing rural economies. While there are considerable concerns about the negative impacts of oil palm expansion, increased political sensitivities concerning these issues are preventing a dispassionate debate about facts on the ground. To facilitate such a debate, this KITLV lunch seminar brings together some of the leading researchers on palm oil expansion in Europe. They will provide a short overview of findings of three recent research projects and discuss their implications for policy makers and development agencies.

Oliver Pye (University of Bonn) is a leading researcher on both the environmental and social consequences of palm oil plantations. He will speak about the findings from an ongoing research project on labour conditions in palm oil plantations, and efforts to improve these conditions. He will introduce the network “Transnational Palm Oil Labour Solidarity” and discuss collaboration between scholars and activists in this context.

Krisztina Kis-Katos is a professor for international economic policy at the University of Göttingen. Having worked on the local effects of globalization on land use change, deforestation and labor market, Kis-Katos will present the results of a recent research project on the impact of palm oil expansion on community conflict and crime.

Ahmad Dhiaulhaq is a postdoctoral research at KITLV Leiden. Having done extensive research on land conflicts across Southeast Asia, Dhiaulhaq will present some of the main findings of KITLV’s research project on palm oil conflicts and access to justice in Indonesia. On the basis of an extensive documentation of 150 conflicts between rural Indonesians and palm oil companies, he will discuss why such conflicts are rarely resolved and what can be done about this.

Marieke Leegwater (Solidaridad) is a palm oil expert at one of the leading dutch NGO’s on sustainable development. She will reflect on the impact of research on the work of development agencies.

Four presentations of 10 minutes each, followed by discussion.

This webinar will be streamed on the public KITLV Facebook page.