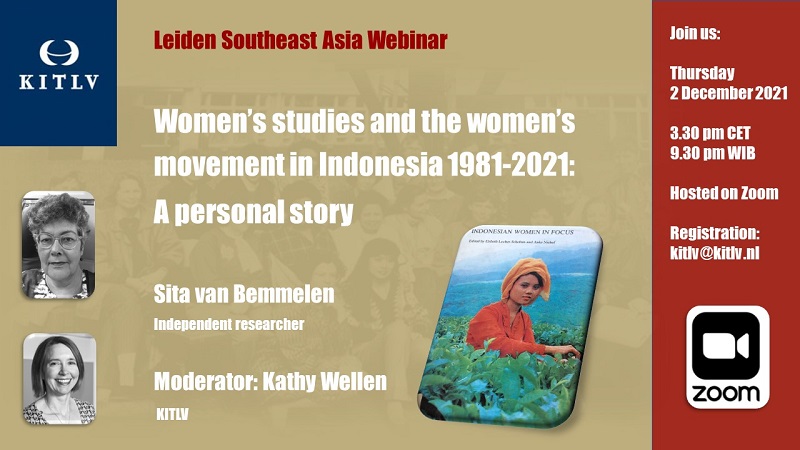 The push to anchor the study of Indonesian women in academia in Indonesia was triggered by the UN women’s conferences in the 1970s and 1980s, contacts between Indonesian and foreign researchers and academics, and the government of Indonesia’s need to integrate women in its development programs. KITLV and the Leiden University were part of this process. The presentation highlights the role of congresses organized by Workshop on Women’s Studies (WIVS) and the cooperation of the institute for Women’s Autonomy (VENA) at RUL and the University of Indonesia (UI) in the G to G project ‘Strengthening Gender and Development Studies in Indonesia (1990-1996). All themes covered at the time are still relevant today, while other issues have been raised since then. The vantage point from which the speaker highlights this are her own observations as a project manager of the said project and gender consultant for various projects funded by international donors since 1996.

Sita van Bemmelen is an independant researcher, gender consultant and the author of Christianity, colonization, and gender relations in North Sumatra: A patrilineal society in flux (Brill, 2018). She is a Doctor of Philosophy (PhD, VU University Amsterdam) and wrote her thesis titled Good customs, bad customs in North Sumatra; Toba Batak, missionaries and colonial officials negotiate the patrilineal Order (1862-1942).

Kathy Wellen, researcher at KITLV and a historian of Southeast Asia specialized in the early modern era.

Registration is required. Please register if you wish to join this webinar by sending an email to: [email protected]. You will receive an invitation to participate in a Zoom meeting by email.

This webinar will be streamed on the public KITLV Facebook page.