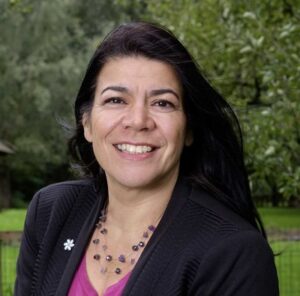 Dr. Esther Captain is a senior researcher and staff member at the Royal Netherlands Institute of Southeast Asian and Caribbean Studies (KITLV) in Leiden, the Netherlands. At KITLV, she is currently developing a new research line on postcolonial Netherlands, with links to Indonesia and the Caribbean. Moreover, she is a researcher at the ‘Independence, Decolonization, Violence and War in Indonesia, 1945-1950’-program at the same institute.

She has been employed as Head of the Centre for Applied Research in Education at Amsterdam University of Applied Sciences, head of research at the National Committee for 4 and 5 May and as a postdoctoral researcher at Utrecht University and the University of Amsterdam. She also worked as a project manager of Indo-European Heritage within the Heritage of the War-program at the Ministry of Health, Welfare and Sports. Captain has been a visiting fellow at Rutgers Center for Historical Analysis of Rutgers University (USA) and a participant in the National Endowment of the Humanities workshop “History and Commemoration: Legacies of the Pacific War” at the East-West Center and the University of Hawaii.

Pierre Asselin and Esther Captain, ‘Cracking down on revolutionary zeal and violence. Early French and Dutch violent responses to the independence struggle in Indochina and the Indonesian archipelago, 1945-1946’ in: Low Countries Historical Review, forthcoming 2020.

‘The Selective Forgetting and Remodeling of the Past: Postcolonial Legacies in the Netherlands’, in: Stefan Jonsson and Julia Willén (eds.), Austere Histories in European Societies: Social Exclusion and the Contest of Colonial Memories, pp. 59-73. London: Routledge (Series: Routledge Advances in Sociology), 2017.