02 Jul Blog: A field trip around Yogyakarta’s sites of the Indonesian struggle against Dutch aggression

The bus waiting on the hot tarmac of the Universitas Gadjah Mada’s campus in Yogyakarta was tightly packed with lunches, water bottles and a large group of researchers. Its interior began to heat up quickly as the engine hit its stride and started to run smoothly. And so it began for the researchers who were driven off into Yogya’s morning traffic—running around all day, visiting various locations inexorably linked to Indonesia’s revolution and the defensive war against the invading Dutch armies after 1945.

The field trip came at the tail end of two days of intense workshopping at the UGM, where researchers working on three projects came together to openly explore each other’s research agendas and questions.[1] Most of all, the workshop showed us that common ground lay below the initial top layer of differences in perspective.

In other words, historians approach historical events in different—and yet not necessarily mutually exclusive—ways. Words carry a lot of weight in this regard. Take ‘decolonization’, for example. In western/Dutch epistemology, the use of this word often seems innocuous and unproblematic enough. To Indonesian historians, however, the term specifically denotes a preconceived Dutch plan to recolonize and federalize Indonesia. In a bizarre, contradictory turn, said federation would then attain independence under the Dutch Crown in what was cynically called a union. When Dutch researchers adopt this latter interpretation more fully, large swaths of Dutch historiography will have to be reappraised—not least in terms of chronologies—with the 17 August 1945 independence date as a key node of analysis.

That history can be explained and used in different ways, is exactly what our Indonesian hosts wanted to clarify, I think. At each location we visited, different events or people were either eclipsed or put into stark relief—as is the case in museums the world over. The Museum Sandi, or password museum, dedicates much of its collection to the importance of coding and secrecy in the struggle against the invading Dutch. Contrary to a small plaque on the museum’s outer walls, semi-hidden behind some bush, the enthusiastic guides did not mention that the republican Ministry of Foreign Affairs operated from this very building in 1947. More evocative still is the life-sized Amir Sjarifuddin mannequin that welcomes all visitors. This early republican leader is not usually served up as the heroic face of revolution. His role in the Renville negotiations and the communist-inspired Madiun Uprising (both in 1948) continue to sustain the snub Indonesian historiography has awarded him.

Whereas Amir’s presence watches over the Sandi, one particular presence was conspicuously lacking in the next museum, the Monumen Yogya Kembali. Despite Soeharto having personally inaugurated the museum in July 1989, his presence has been carefully but steadily diminished following the collapse of the Orde Baru. Likewise, General A. H. Nasution, one of Soeharto’s strongest competitors for the historical limelight, was notably absent among the artefacts contained within this cone-shaped museum—except, that is, for one photo, in which we can glimpse his back.

This lacuna was wonderfully filled an hour’s drive away from Yogyakarta, in Kalibawang. There, under the shade of a large tree, an imposing roadside monolith—the Monumen Markas Besar Komando Djawa—commemorates Nasution’s tenacious stand against the violent onslaught of the Dutch. Just across a river that used to mark the limits of Dutch influence in the region and perched on a 700-meter-high rocky outcrop within sight of Yogyakarta proper, history became almost palpable for the researchers gathered there. It truly came alive when a village elder, Ibu Niti, regaled us with stories of how the villagers fed and protected Nasution, who had introduced himself locally as a teacher.

Years later, Nasution helicoptered back into the area to thank the villagers. Needless to say, the Commander of Java is still fondly remembered. Perhaps Soeharto’s legacy is, by now, less salonfähig and therefore his family has deemed financing a Soeharto museum—our last stop—necessary. This shrine deftly crosses the line from history into the realm of make-believe. A lengthy video presentation, for example, showcases thousands of pictures highlighting Soeharto’s role as a father figure who modernized Indonesia. Helped along by many other artefacts in the museum, such a one-sided display of Soeharto’s terms in office effectively whitewashes the violent consequences of a decidedly darker streak to his character and period in power.

For the Dutch researchers specifically, this trip put a great deal into perspective. On the one hand, it appears that the heinous Dutch outburst of violence only appears in displays as one variable in the equation that is the struggle for Indonesian independence and the founding of the Republic. On the other, we experienced first-hand that in Indonesia—regardless of its varying interpretations—the history of the revolution is situated very closely to the surface of daily life. The latter is the red thread that linked the museums. The Indonesian engagement with its colonial past is, of course, starkly contrasts with how the Dutch have traditionally interacted with theirs: through forgetting, ignoring blind spots and sometimes maintaining preconceived notions that continue to hold sway up to the present day. The bus full of researchers has a long road ahead of itself, but the beginning of its journey—experiencing Indonesian perspectives together with Indonesian researchers—has been tremendously valuable.

(Roel Frakking is a postdoctoral researcher at the KITLV who specializes in colonial violence, in general, and the late-colonial Netherlands’ East Indies and British Malaya, in particular). Indonesian and Dutch colleagues in the bus. 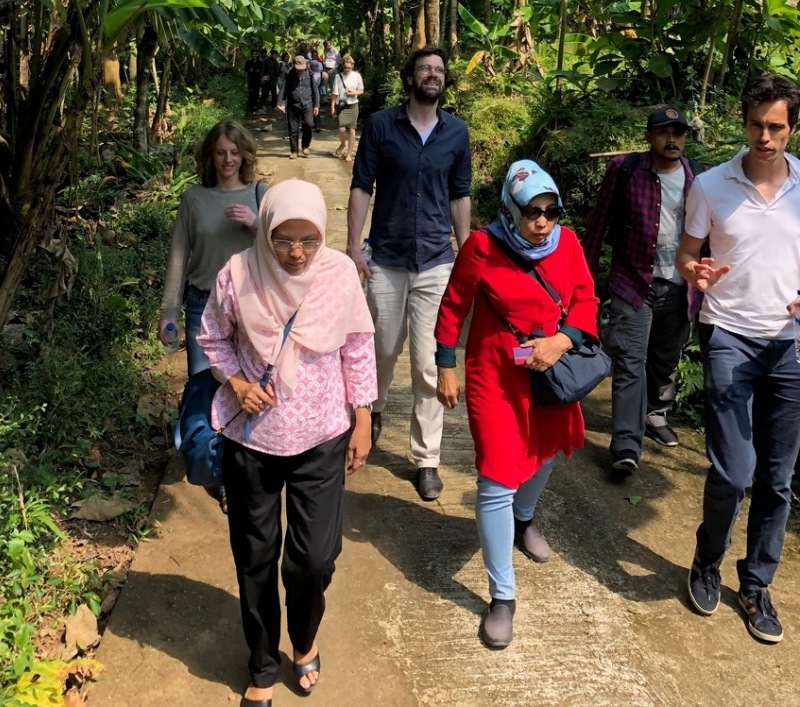 The team on their way to the Markas Gerilya T.B. Simatupang.