My most memorable Lunar New Year was a quarter of a century ago in Pontianak, the provincial capital of West Kalimantan. One month prior to this, news had started coming in about deadly clashes between the indigenous Dayak people and migrant Madurese in that province and, together with several international media reporters, I had flown to Pontianak. I believe it was only on the plane that I realized that our trip coincided with Chinese New Year.

That a Chinese Indonesian from Jakarta would forget the date of the Lunar New Year is something that Indonesians growing up in the post-Soeharto era find difficult to fathom. I, however, grew up in Soeharto’s New Order era, where almost anything relating to Chinese culture was prohibited. These restrictions were more strictly implemented in Jakarta, the centre of government. Throughout those decades, some Chinese Indonesian families did nevertheless continue to quietly celebrate the Lunar New Year. However, for those with my family background – Peranakan Chinese with parents fluent in Dutch and the local vernacular instead of Mandarin or Hokkien – and living far away from elderly relatives outside of Chinese neighbourhoods, Chinese New Year would silently come and go.

On arrival, we found ourselves in a quiet and tense Pontianak. Clearly, our appearance had been anticipated, as our hotel was filled with ‘guests’ sporting plenty of muscles and military haircuts. Any journalist operating in Indonesia at the time would have immediately recognized these ‘intels’ – intelligence operatives who were present at any event deemed to be ‘sensitive’ for the government. Lucky for me, these burly ‘guests’ assumed that foreign media journalists would be blonde-haired and blue-eyed, which meant that I and D – the only other Indonesian – were practically ignored.

While our foreign colleagues were busy trying to avoid the intels, D and I decided to visit the local Chinese temple, even though a night curfew had been imposed. Compared with other Indonesian cities, Pontianak has a very high Chinese population: almost 15% of its residents are ethnic Chinese, far above the national average of between 2% and 3%. And our suspicions proved to be spot on: many Pontianak residents took the risk of breaking the curfew and running into possible danger to pray at the temple on the eve of the Lunar New Year. Even more than the city shrouded in fear, or intimidation by plain-clothed officers, it was this visit to the Chinese temple that left a lasting impression on me.

D walked into the temple ahead of me, and disappeared amidst the worshippers already filling the building. I was about to follow D, but as soon as I entered the main door, I was stopped: “Where are you from? Who are you with?” a man asked sternly, almost threateningly. I later found out that he was one of the temple’s caretakers.

As a journalist, I am used to entering unfamiliar places as inconspicuously as possible, without attracting any attention. And this time in particular, I had expected to enter the temple anonymously: after all, I had been called cik – an epithet for Chinese women or girls – or just “hey Chink!” for as long as I could remember when walking the streets of Jakarta. How could a Chinese-looking woman conjure up any suspicion on entering a Chinese temple on Lunar New Year’s eve? I explained to the gentleman that I was indeed not a Pontianak resident, and that I wanted to experience Chinese New Year. “Aha, you’re from Jakarta, cik? Now I understand,” he said, already sounding kinder. Of course I understood that he was being careful, I told him, as the city was gripped by tension. We spoke for a bit while D – who was walking around freely without anyone stopping him – approached us, trying to hide his amusement at me being “interrogated”.

“You entered the temple so hesitantly, glancing left and right. Naturally they were going to stop you,” D later said to me. So how come D, who looks very Javanese, was able to slip in so easily, I wondered, rather annoyed. Then D reminded me that he grew up in the Central Javan city of Solo with his Javanese father and Chinese mother, who converted to Islam when she got married. “I am used to celebrating Chinese New Year with my mother’s family.” A Chinese temple was not unfamiliar to him. For me, on the other hand, that evening in Pontianak was my first Lunar New Year ‘celebration’.

This mixed irony – and wealth – of cultures, religions and ethnicities is called Indonesia. It is a richness that is unfortunately easily manipulated by a handful of people to advance their own agenda. Hopefully, mine will be the last generation of Indonesians who had to grow up without celebrating Chinese New Year. 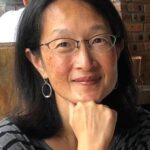 Linawati Sidarto grew up in Jakarta, and studied economics and linguistics in the United States. She has worked as a journalist in Indonesia and the Netherlands. In the last decade she has been a freelance journalist and translator, mainly for the Indonesian publications Tempo and The Jakarta Post.