Introduction to the KITLV Annual Report for 2020

The year 2020 will be remembered by the KITLV as the year of the Covid-19 crisis, with the difficulties created by the pandemic having had a considerable impact on the institute. From March onwards, conducting fieldwork became virtually impossible; the fellows programme was put on hold, and workshops and conferences were postponed or could only be held digitally.

For ongoing research, the crisis meant the closure of archives and libraries, the postponement of fieldwork, and all-important in-person contact with colleagues and sources becoming virtually impossible. Inevitably, the pandemic resulted in delays and impoverishment. Revising existing plans, devising new ways of conducting research, and making new plans all entailed considerable creativity, along with decisive action.

From the very early days of the crisis and the closure of the institute in mid-March onwards, a great deal of energy was devoted to maintaining the community that the KITLV also embodies. A weekly newsletter was distributed internally. In addition to addressing professional matters, the newsletter also gave three different employees each week the opportunity to share their sometimes very personal reflections on these times. External work included a series of webinars, launched after the summer. All in all, everything and everyone continued working, making commendable efforts. However, the fact remains that a crisis lasting several years would have far-reaching consequences for research prospects and for cohesion and dynamics within the institute.

There has been a dramatic increase in the social and academic interest in the colonial/postcolonial history of the Netherlands over the past decade. The KITLV has contributed to and also benefited from this, as evidenced by the KITLV-NIMH-NIOD research into the war of independence in Indonesia, and the KITLV research into the colonial and slavery past of Rotterdam, among other projects. The KITLV-NIMH-NIOD research project is scheduled to be concluded by the end of 2021. The Rotterdam project was completed in late 2020, marked by the presentation of three books at the Wereldmuseum: Gert Oostindie (ed.), Het koloniale verleden van Rotterdam  (The colonial past of Rotterdam), Alex van Stipriaan, Rotterdam in slavernij (Rotterdam in slavery), Francio Guadeloupe, Paul van de Laar & Liane van der Linden (ed.), Rotterdam, een postkoloniale stad in beweging (Rotterdam, a postcolonial city in motion).  At the presentation, which was widely covered by national and regional press, Mayor Ahmed Aboutaleb was among those who spoke highly of the quality of the research entrusted to the KITLV.

As the appendix shows, researchers at the institute also published a considerable number of books and articles in 2020. Special mention should be made of Marieke Bloembergen & Martijn Eickhoff, The politics of heritage in Indonesia; A cultural history, and the first two doctorates awarded under the KITLV’s PhD programme to Grace Leksana (Embedded remembering; Memory culture of the 1965 violence in rural East Java) and Hoko Horii (Child marriage as a choice; Rethinking agency in international human rights). In recognition of his exceptional academic achievements, Ward Berenschot was appointed professor by special appointment in ‘Comparative political anthropology of South and Southeast Asia’ at the University of Amsterdam. In taking up this position, Berenschot is following in the footsteps of Peter Boomgaard and Gerry van Klinken, both of whom previously held the KITLV chair at the UvA.

Thanks to a grant from the KNAW Research Fund, the KITLV was able to make a start on a new line of research entitled ‘Governance of climate change’, working in collaboration with the NIOO and NIAS institutes that are part of KNAW. Another new initiative is the ‘Atelier KITLV’, which works with arts platform Framer Framed to find new models for collaboration and cross-pollination between the KITLV, the arts, journalism and activism.

The institute’s project portfolio development and earning capacity over recent years can be described as extremely positive: the earning percentage is 100%, which means that the institute’s own research income is as high as the budget made available by the KNAW. For now, the trend is set to continue, thanks to Francio Guadeloupe who, working with Corinne Hofman, managed to secure a grant of 3.5 million euros in NWO’s (Dutch Research Council’s) Caribbean call for their programme ‘Island(ers) at the helm’ at the end of 2020. This makes the position of Caribbean research within the KITLV even stronger. The other side of the coin is that a number of high-profile NWO and ERC research proposals relating to contemporary South East Asia were rejected; even excellent KITLV researchers are unable to escape the ruthless competition in a field in which the average quality of the applications far exceeds the resources available.

Islanders at the Helm 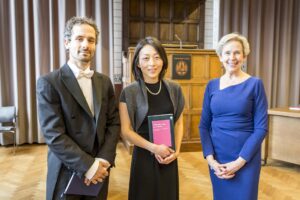 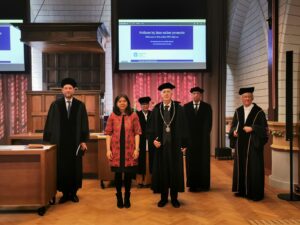