Introduction to the KITLV Annual Report for 2021

As noted in the previous annual report, the global pandemic that hit in early 2020 impacted the KITLV greatly, and unfortunately it continued to do so in 2021. Opportunities for working in the office were scant, and while organizing fieldwork was not impossible, it did represent a major challenge.

Our employees worked their way through these difficult times in a creative and often admirable manner. Having said that, the third lockdown in particular – one that was implemented after an optimistic summer in which holidays were enjoyed – came as a major blow for the KITLV, as it did for many other organizations.

Covid-19 did, however, lead to a number of innovations. One is that the institute now successfully organizes seminars, workshops and other meetings in hybrid form, making use of newly acquired 360° cameras. The fellowship programme, formerly in hibernation, was cautiously brought back to life in the form of digital fellowships, focusing on remote collaboration. Several researchers have now incorporated new, digital research methods into their research practice. A start has also been made on a series of video portraits of our researchers. Some of these are already online.

The new direction taken by the institute in respect of the climate crisis and its impact in Southeast Asia and the Caribbean continued to become more crystallized over the past year. With some PhD projects having already started up in 2020, 2021 saw the official launch of two new collaborative ones. The KNAW-funded pilot project entitled ‘Climate change and governance in marine protected areas in Indonesia and the Caribbean’ (a collaboration between natural scientists and social scientists) started up in April. And September saw the start of the Dutch Research Council project ‘Islanders at the helm; Co-creating sustainable and inclusive solutions for social adaptation to climate challenges in the (Dutch) Caribbean’. A postdoc was recruited for the first project, and as many as four new PhDs and four new postdocs were taken on for the second.

Where the colonial/postcolonial history of the Netherlands is concerned, 2021 was the last full year of KITLV / NIMH / NIOD research into the war of independence in Indonesia. The results of this project are due to be presented in February 2022 and these will no doubt attract a great deal of interest. Research into the colonial and slavery past of the city of Rotterdam was rounded off with a synthesizing English-language publication edited by Gert Oostindie and entitled Colonialism and slavery; An alternative history of the port city of Rotterdam. In response to this research, the city’s mayor, Ahmed Aboutaleb, apologized in December for the city’s part in the system of colonialism and slavery from 1600 onwards. A grant for a new project focused on research into the colonial and slavery past of The Hague was also secured in 2021.

As usual, KITLV researchers published widely throughout the year, with such publications taking the form of monographs, articles, collections, and themed editions of journals. Special mention should be made of Tom Hoogervorst’s monograph Language ungoverned; Indonesia’s Chinese print entrepreneurs, 1911-1949, as well as of the volume co-edited by him and entitled Sinophone Southeast Asia; Sinitic voices across the Southern Seas. The two publications resulted from his Dutch Research Council/Veni-funded research into the history of Sino-Malay. Gert Oostindie and Alex van Stipriaan published the volumes Antillean Heritage I: Then and Now and Antillean Heritage II: Now and Beyond. Christiaan Harinck received his PhD from Leiden University in November 2021 for his thesis ‘Zoeken, aangrijpen en vernietigen!’ (Search, seize and destroy!) on the topic of Dutch military action in Indonesia during the revolution.

On 11 November, Ward Berenshot delivered his inaugural lecture as professor by special appointment in ‘Comparative political anthropology of South and Southeast Asia’ at the University of Amsterdam. This was an important occasion for both him and the KITLV.

As usual, KITLV researchers received a lot of attention in the media. The renewed interest in the colonial past of the Netherlands plays a significant role in this, but the attention the Indonesian press is paying to research funded by Dutch Research Council and RISTEK-BRIN (‘Palm oil conflicts and access to justice’) is also worth mentioning.

The Future of the Colonial Past

On 17 December, Gert Oostindie delivered his valedictory lecture entitled ‘The Future of the Colonial Past’ at Leiden University’s Academy Building. Following this speech, Oostindie was appointed an Officer in the Order of Orange-Nassau by the Mayor of Leiden, Henri Lenferink. Mayor Lenferink expressed a great appreciation for the exceptional role that Oostindie had played in scholarship, social debate and the improvement of relations within the Kingdom of the Netherlands. After serving as director for more than 20 years, Oostindie passed the baton to Diana Suhardiman. The new director studied land and water management in Wageningen and, up until her move to the KITLV, had worked as a Research Group Leader in Governance and Inclusion at the International Water Management Institute in Laos. 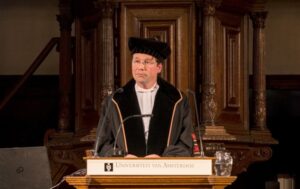