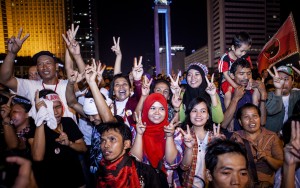 JAKARTA, INDONESIA – JULY 09: Supporters of Indonesian Presidential Candidate Joko Widodo declares victory in the Indonesian Presidential election, although the vote counting is not complete, the race is very close, and the other Candidate Prabowo Subianto has also claimed victory in the race on July 9, 2014 in Jakarta, Indonesia. Election day in Indonesia sees locals take to the polls to chose between Joko Widodo and Prabowo Subianto as their next president. Recent polls have indicated a tightly fought contest, with allegations of corruption marring the process. (Photo by Oscar Siagian/Getty Images)