Posted at 13:51h in News Items, Spotlight on the Caribbean by KITLV 0 Comments
Share

On Tuesday, 5 April, Saba Commissioner for Culture Rolando Wilson, welcomed a team of scientific researchers working at the Saba Heritage Center to his office, to discuss the potential impact of investigative findings.

The Saba Heritage Center currently hosts several team members of the Island(er)s at the Helm research programme, which focusses on social adaptation to climatic challenges in the (Dutch) Caribbean. The transdisciplinary project is supported by the Netherlands Organisation for Scientific Research (NWO) in collaboration with the University of St. Martin (USM) and various institutions and stakeholders across the Kingdom and the wider Caribbean. During the coming five years, the Caribbean-European team include anthropologists, archaeologists, ethnobotanists, climatologists, engineers, and human rights scholars and political scientists. They hope to engage in a co-creative research with government agencies, NGOs and first and foremost with local communities to develop sustainable and inclusive solutions for the challenges that the island(er)s face in the context of climate change.

The team, which is currently on Saba, is looking into the deep past of the island when the first inhabitants of Saba settled the areas of Plum Piece, Old Booby Hill, Black Rock and Fort Bay Ridge around 3800 years ago, and the ensuing centuries when the island became more populated. The researchers laid out the questions they seek to answer to Commissioner Wilson: what did the island’s climate look like over time? How did the first settlers on the island adapt and respond to the devastating hurricanes and extreme droughts? How where their houses built and how did they take care of their water? What did the first inhabitants of Saba eat and what were they planting? What knowledge can we obtain from the past and the present to become well equipped for the challenges of the future?

The Saba Heritage Center seeks to document and archive the island’s unique heritage and preserve the Saban stories for generations to come. It houses all archaeological findings from the island which are curated by the Saba Archaeological Center (SABRC). Commissioner Wilson expressed the importance of Saba’s cultural heritage and its safeguarding and protection for future generations. “Saba’s culture merits to be a top priority and should be taken care of!”, Wilson stated.

On Thursday, 7 April at 5.30 in the evening, researchers will present their initial findings to the public in an event sponsored by the Heritage Center. For more information, please visit Saba Heritage Presentations by Island(er)s at the Helm team.

Islanders at the Helm will also hold a public meeting at USM on St. Martin on the evening of Tuesday, 12 April at the university’s lecture hall with some of the same scientists who will be carrying out research activities on the neighboring island. 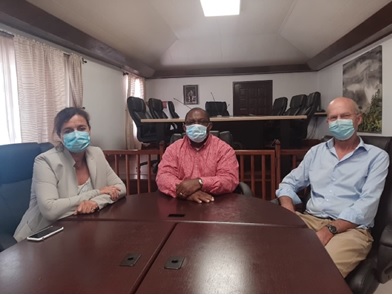