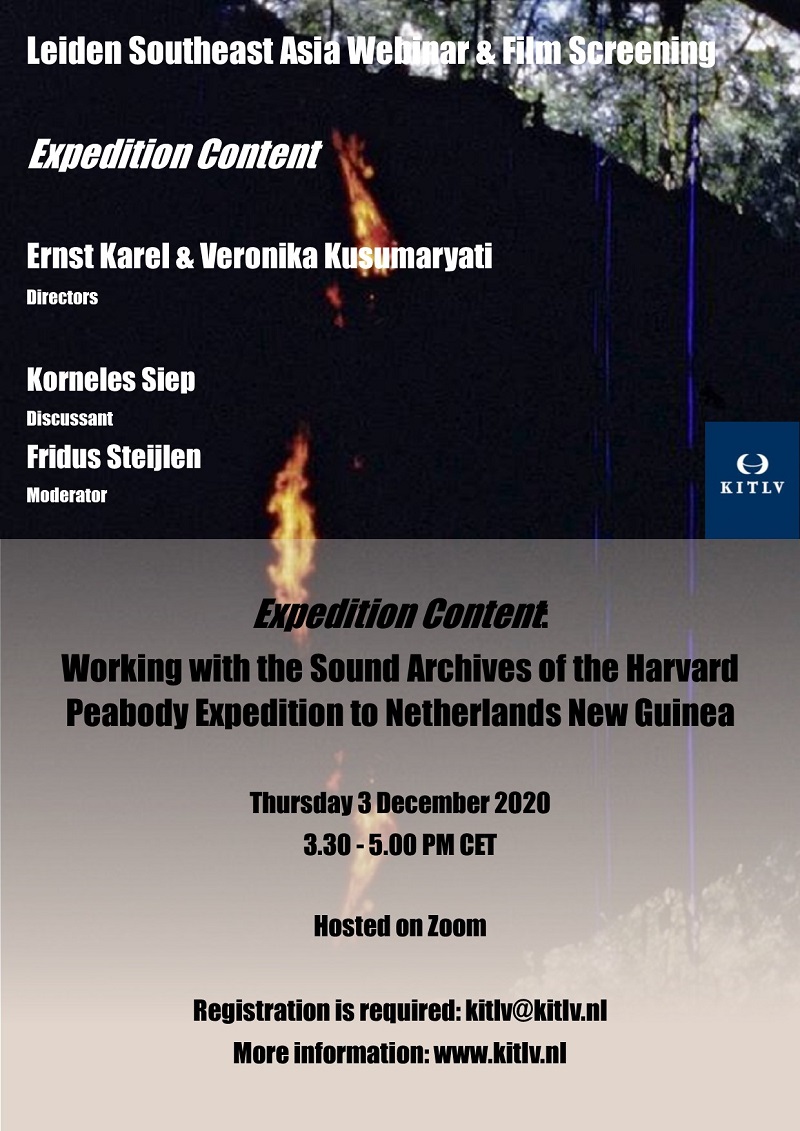 In 1961, filmmaker Robert Gardner organized the Harvard Peabody Expedition* to Netherlands New Guinea (current day West Papua). Funded by the Dutch colonial government and private donations, and consisting of several of the wealthiest members of American society wielding 16mm film cameras, still photographic cameras, reel-to-reel tape recorders, and a microphone, the expedition settled for five months in the Baliem Valley, among the Hubula (also known as Dani) people. It resulted in Gardner’s highly influential film Dead Birds, two books of photographs, Peter Matthiessen’s book Under the Mountain Wall, and two ethnographic monographs. Michael Rockefeller, a fourth-generation member of the Rockefeller (Standard Oil) family, was tasked with taking pictures and recording sound in and around the Hubula world. Expedition Content is an augmented sound work composed from the archive’s 37 hours of tape which document the strange encounter between the expedition and the Hubula people. The piece reflects on intertwined and complex historical moments in the development of approaches to multimodal anthropology, in the lives of the Hubula and of Michael, and in the ongoing history of colonialism in West Papua.

Ernst Karel (Palo Alto, USA) works with sound, including electroacoustic music, experimental nonfiction sound works for multichannel installation and performance, and postproduction sound for nonfiction vilm, with an emphasis on observational cinema. His work often focuses on the practice of location recording and composing with unprocessed location recordings. In the Sensory Ethnography Lab at Harvard, Karel has collaborated with filmmakers and taught courses in reality-based audio. In fall 2019 he was the visiting fellow at the Center for Experimental Ethnography at the University of Pennsylvania.

Veronika Kusumaryati (Bantul, Indonesia) is a political and media anthropologist working in West Papua. Her scholarship engages with the theories and historiography of colonialism, decolonization, and postcoloniality. She has worked as a curator and produced documentaries that were screened at the Jakarta International Film Festival, Oberhausen International Short Film Festival, and Tampere Film Festival. She received her bachelor degree from the Jakarta Institute of Arts majoring in Film and Media Studies. She was a member of the Sensory Ethnography Lab and currently a postdoctoral fellow at Georgetown University Edmund A. Walsh School of Foreign Service.

Korneles Siep is a Papuan artist/musician from the Baliem Valley. He plays modern Hubula music with the Pikalu band. In addition, he works with the Office of Justice, Peace and Integrity of Creation of Jayapura, West Papua. Mr. Siep contributed to Expedition Content by interpreting Rockefeller tapes together with late Hubula anthropologist Nicolaus Lokobal.

The webinar will be moderated by Fridus Steijlen, senior researcher at KITLV and Professor Extraordinary ‘Moluccan Migration and Culture in a comparative perspective‘ at the Faculty of Social Sciences of the VU University, Amsterdam.

The Harvard Peabody Expedition to Netherlands New Guinea was a large-scale anthropological expedition carried out by American anthropologists and artists in 1961. It was a three-year undertaking that was largely funded by private donations, including the Rockefeller family, with the support of the Dutch colonial government, and took place among the Hubula (also well-known as the Dani) of the Baliem Valley in Netherlands New Guinea from April to August 1961, two years before the territory was transferred from the Netherlands to Indonesia.

Registration is required. Please register if you wish to watch the film ánd join this webinar by sending an email to: [email protected]. You will receive the following information by email:
– a password and link to the film Expedition Content on Vimeo, 24 hours before the webinar.
– an invitation to participate in the webinar, a Zoom meeting, by email.

Donation to educational project in Papua

There are no fees for the film screening and webinar. However we ask participants to donate on a voluntary basis to an educational project in Papua, which is supported by the Dutch charity foundation Hapin. As a suggestion for the donation we propose the price of a cinema ticket (€ 12,50). Please visit Hapin’s website to find out more about how to donate: https://eng.hapin.nl/about-hapin/. When making a donation, please include ‘Expedition Content‘ as a reference.

The webinar will be streamed on the public KITLV Facebook page. It is  possible to watch the webinar afterwards.