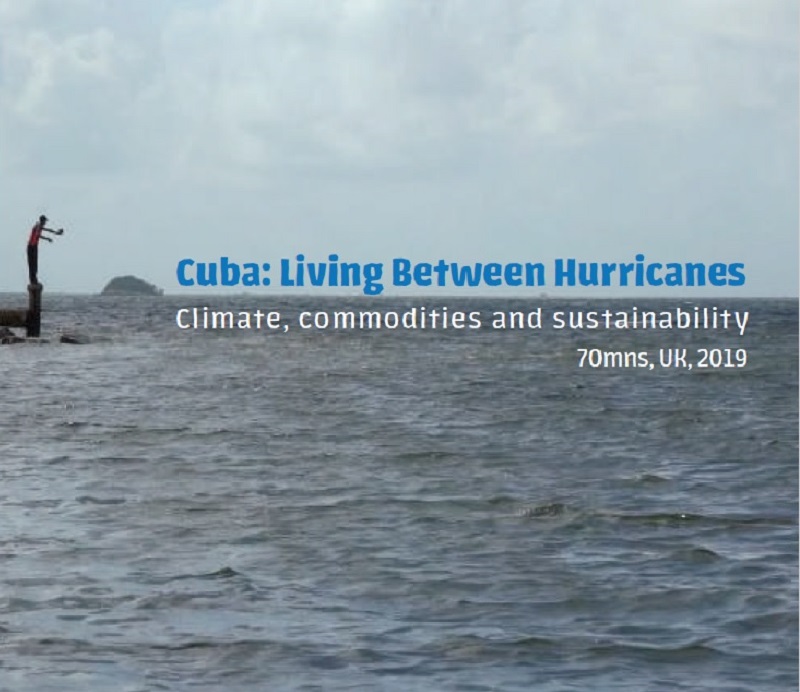 You are welcome to attend the webinar ‘Cuba: Living between hurricanes. A conversation with Michael Chanan and Jean Stubbs’.

A film about the elements – hurricanes and rain, the sea and the earth.

About a fishing port on the north coast of Cuba which has seen better days: Caibarién, where Hurricane Irma – one of the most powerful ever to sweep the Caribbean – made landfall on 9th September 2017.

About the effects of climate across the centuries in a Caribbean island sucked into global markets for its commodity crops – tobacco, coffee and above all, sugar. How sugar changed the landscape, through deforestation and soil exhaustion.

About the collapse of sugar and the encroachment of a new commodity market – tourism.

About the growing threat from climate change, and the move towards reforestation, ecotourism and sustainable farming.

Filmed, edited and directed by Michael Chanan.
Written and Produced by Jonathan Curry-Machado and Jean Stubbs

You can watch the documentary online and for free at www.livingbetweenhurricanes.org or vimeo.com/369196618.

Michael Chanan is a film maker, writer and Emeritus Professor of Film & Video at Roehampton University, London. He began his film career making documentaries on avant garde classical music for BBC2. As well as interests in music, early cinema and the politics and practice of documentary, a large part of his work as both writer and filmmaker has been focussed on Latin American cinema, especially Cuban. He is the author of a history of Cuban cinema and has filmed in most of the countries in the continent, including Cuba, at intervals since the early 1980s.

Jean Stubbs is founding codirector of the Commodities of Empire project; founder member of the Commodity Frontiers Initiative; Associate Fellow at the Institute of Latin American Studies (ILAS, University of London) and the Institute of the Americas (University College London, IA-UCL); Professor Emerita of London Metropolitan University, where she directed the Caribbean Studies Centre (2002-2009); member of the Academy of History of Cuba; and past CSA president (2002-3) and SCS chair (1993-5). Since her early monograph Tobacco on the Periphery: A Case Study in Cuban Labour History, 1860-1958 (Cambridge University Press, 1985), she has published widely on Cuba, her specialist interests spanning tobacco, labour, gender, race and migration. She co-produced with CurryMachado Cuba: Living Between Hurricanes (dir. Michael Chanan 2019

Rosemarijn Hoefte, senior researcher at KITLV and Professor in the history of Suriname after 1873 in comparative perspective at the University of Amsterdam.

Registration is required. Please register if you wish to join this webinar by sending an email to: [email protected]. You will receive an invitation to participate in a Zoom meeting by email.

The webinar will be streamed on the public KITLV Facebook page.