Panel discussion | Indonesia: The road to the April 2019 elections

Indonesia, the world’s third largest democracy, is preparing to go to the polls in a few months. On the 17th of April 2019, approximately 190 million Indonesians will vote in the biggest election the country has ever faced, electing both their president and parliament. As the elections draw near, the political battle between incumbent President Widodo and his contender Prabowo Subianto is in full swing…

Indonesia, the 4th most populous country in the world, hosts many different ethnicities, religions, views and opinions. What issues are expected to take center stage? Who or what will have the biggest influence in determining the outcomes, and why? What role will religion and identity play in the 2019 elections? How can economic developments in Indonesia impact the dynamics of the elections? And finally, what can we expect of the role of social media in the elections in Indonesia, a country that has one of the largest and most active group of social media users in the world?

The Asia and Oceania Department (DAO), Dutch Ministry of Foreign Afffairs, invites you to join a panel discussion on the dynamics on the road to Indonesia’s April 2019 elections, moderated by Max Valstar, Head of the South Asia, Southeast Asia and Oceania division at the Dutch Ministry of Foreign Affairs. The afternoon will be kicked-off with some video messages from Indonesia.

Registration
As seats are limited, please register ASAP by sending your name and occupation to [email protected]. 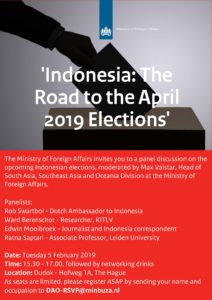