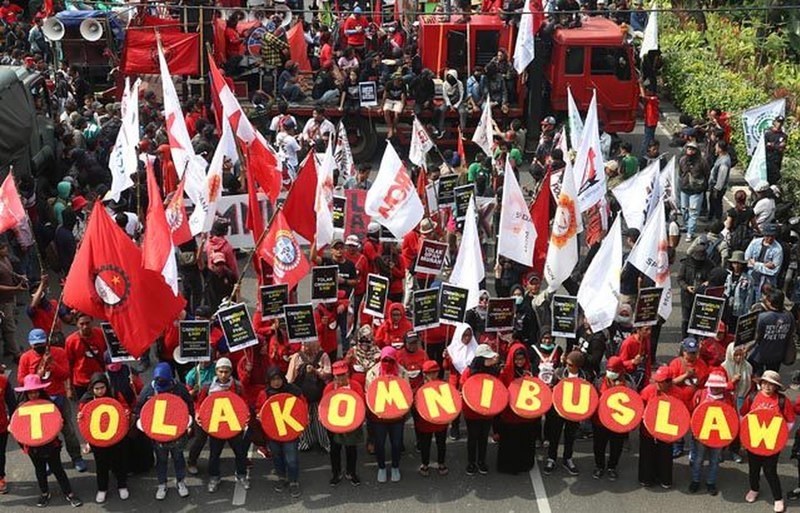 In recent weeks, mass protests have once again rocked cities across Indonesia. Students and labour unions have taken to the streets to protest against the Omnibus Law. This law, adopted by Indonesia’s parliament on October 5th, ranks among the most ambitious reform bills in its history: 900 pages long and affecting 79 laws, Omnibus Law aims to boost Indonesia’s economy by cutting back onerous environmental and labour regulations. Critics maintain that the law benefits only business elites while undermining citizen rights and facilitating environmental destruction. The adoption of this law, as well as the police repression of the protests, are stoking worries about Indonesia’s democracy. Has Indonesia’s parliament adopted a law that benefits only business elites? Does the repression of opposition to the law mark a return to Indonesia’s authoritarian past? Is the scope for public debate and democratic opposition diminishing in Indonesia, and if so, why?

To discuss these questions, KITLV brings together a diverse panel, including:
-Andrinof Chaniago (former minister of National Development Planning and lecturer, Department of Political Science, Universitas Indonesia): What are the pro’s and con’s of the omnibus law?
-Yogi Permana (PhD student at KITLV and researcher at LIPI): What will be the environmental effects of the Omnibus law?
-Wijayanto (lecturer, Department of Government Science, Universitas Diponegoro and Director of the Center of Media and Democracy, LP3ES): What has been the government’s response to the protests and the criticisms of the bill?
-Agiel al Assyafar (student, leader of Pelajar Islam Indonesia): How and why are students demonstrating?
-Eve Warburton (postdoctoral researcher at National University Singapore): Is the omnibus law a sign of regression of Indonesia’s democracy?

Short presentations from the panelists will be followed by discussion.

Live stream on Facebook
The webinar will be streamed publically on the KITLV Facebook page. It is also possible to watch the webinar afterwards.