Webinar | Looking back: A reflection on two decades of democracy in Indonesia | Step Vaessen 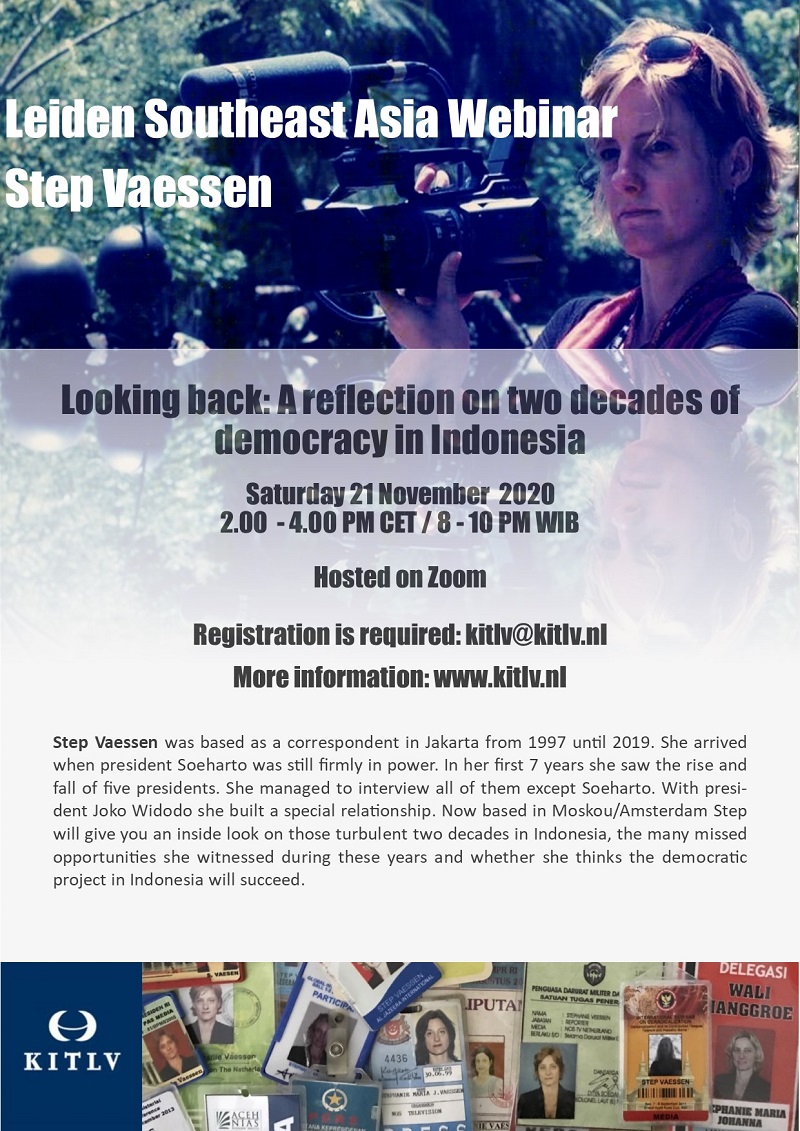 Step Vaessen was based as a correspondent in Jakarta from 1997 until 2019. She arrived when president Soeharto was still firmly in power but would soon witness one of the most turbulent transformations to democracy seen in recent history. Indonesia as a nation was on the brink of collapse amidst widespread religious and ethnic violence. The democratic project has been a long and complicated one and is far from finished. In her first 7 years she saw the rise and fall of five presidents. She managed to interview all of them except Soeharto. With president Joko Widodo she built a special relationship after she followed him for two weeks for a documentary she made for Aljazeera. Now based in Moskou/Amsterdam she will give you an inside look on those turbulent two decades in Indonesia, the many missed opportunities she witnessed during these years and whether she thinks the democratic project in Indonesia will succeed.

Speaker
Now based in Moscow, Step Vaessen previously reported on Asia for more than 20 years and was one of the most senior international journalists covering the region. After working in Southeast Asia for NOS-TV from the Netherlands she joined Al Jazeera in 2006. She witnessed first hand most of the major news events in Asia: the fall of president Soeharto in 1998, the violent aftermath of the referendum for independence in East Timor, the Indian Ocean tsunami in 2004, the Rohingya crisis in Myanmar, the protests against Jakarta governor Basuki Tjahaya Purnama and major natural disasters in Indonesia, Pakistan, the Philippines and numerous religious and ethnic conflicts. She covered stories in China, Thailand, Malaysia, Cambodia, Laos, Vietnam, Japan and South Korea. She made several documentaries for 101 East: Indonesia’s killing fields about anti-communist massacres in 1965, Indonesia’s Rock governor about the rise of president Joko Widodo and a film for the Correspondent series: Trail of Murder, Indonesia’s bloody retreat from East Timor, which was nominated Best Documentary at the Asian TV awards in Singapore. For Talk to Al Jazeera she did several interviews with Indonesia’s president Joko Widodo and Jakarta’s governor Basuki Tjahaya Purnama. She published a book, Jihad with Sambal, and won an Academy Award in 2005 for her reports on the Indian Ocean tsunami.

Live stream on Facebook
The webinar will be streamed on the public KITLV Facebook page. It is also possible to watch the webinar afterwards.