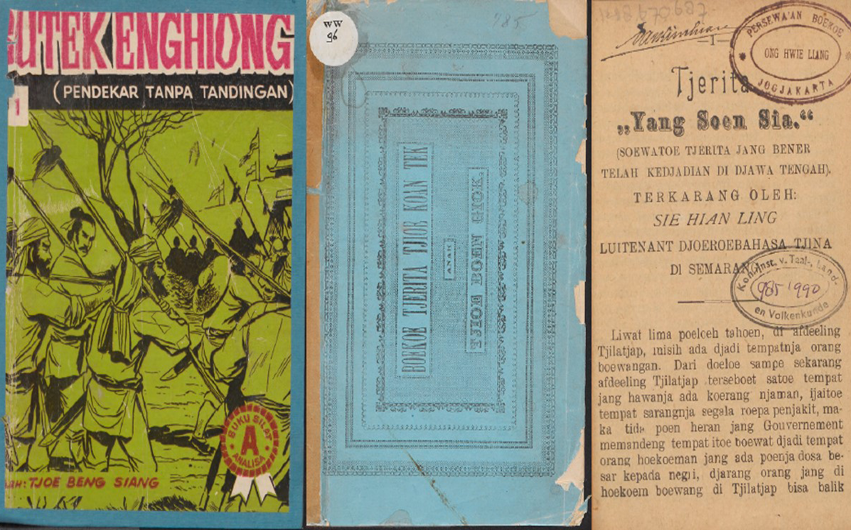 The KITLV houses a unique collection of Sino-Malay literature, consisting of around 1500 books published from 1880 to the mid-1960s. Most of the collection has been digitized as part of the Metamorfoze Project, which has thus far resulted in a corpus of 4080 high-quality OCR’ed pdfs. This valuable collection of primary sources on late-modern Southeast Asia focuses on the region’s substantial population of peranakan or localized Chinese.

The peranakan community not only had connections to Chinese groups in China and elsewhere, but also served as a layer between the Europeans and the indigenous populations within the colonial hierarchy of the Dutch East Indies. The generations born and raised in Java, Sumatra and several other islands have typically sought literacy in the Malay language, a development that accelerated with the introduction of the printing press. As a result, a new, hybrid literary culture emerged, encompassing not only newspapers but also poetry, prose, handbooks and contemporary accounts. This tradition features a unique mix of Chinese, Malay and European elements. Unlike the classical literature produced at the Malay courts, Sino-Malay texts often cover mundane topics, written in clear, realistic prose. Their writing style was generally referred to as “Low Malay” (Melajoe rendah), although this label was (and is!) often used impressionistically rather than according to linguistic typology. In fact, the epithet was used somewhat condescendingly in reference to authors who paid little regard to the literary conventions set by the Malay courts. The Sino-Malay written tradition largely disappeared during Soeharto’s New Order and is now not often thought of as literary heritage.

It is our primary aim to improve the availability and searchability of the Sino-Malay works. We will do so through the use of specialized software and in collaboration with colleagues engaged in comparable types of eResearch, among whom the participants of the Elite Network Shifts project. The development of an infrastructure through which this material can be accessed constitutes a first step towards a wider ambition of bringing together scholars from numerous academic disciplines who can benefit in different ways from the insights, knowledge and perspectives offered by the Sino-Malay literature. Our research interests are twofold. Firstly, we aim to gain a deeper understanding of the characteristics of the idiosyncratic Malay variety found in this literature, its chronological development and its possible influence on the standardization of (Indonesian) Malay. Secondly, we hope to provide new ideas on popular culture in the Dutch East Indies – in particular with regard to interethnic contact, cultural adaptation and the introduction of new concepts – through this unparalleled collection of non-Dutch sources.