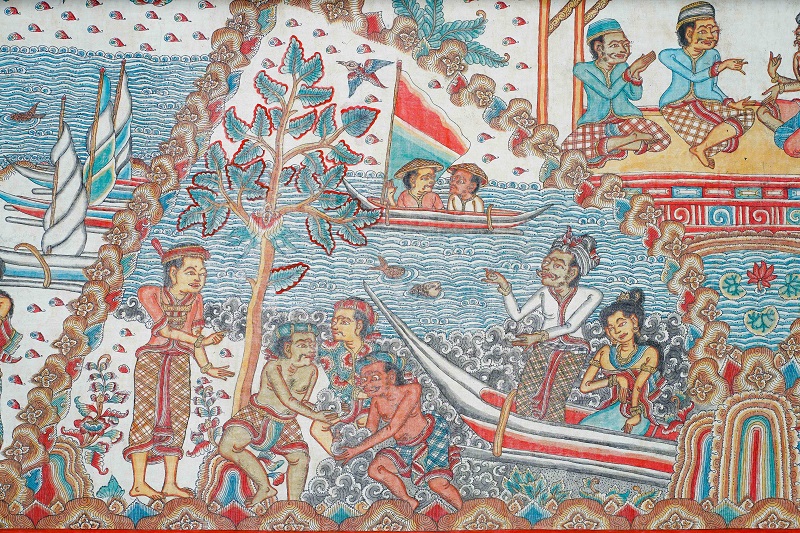 Manuscripts from Sulawesi recount the legendary family relations between Mamuju in West Sulawesi and Badung in South Bali. This relationship is said to have commenced with the marriage between Puatta Mamuju and Mera’ara Puang and the birth of their son Lasalaga. Raised on both Bali and Sulawesi, Lasalaga grew into a fierce warrior and fought valiantly against the Sasak of Lombok. As an adult he was asked to rule Mamuju. A capable leader he ruled with his wife Puatta Boqdi from Pamboang. They extended Mamuju’s influence in Sulawesi and were among the first rulers to embrace Islam in that area.

The Lasalaga Project aims to bring this story to new audiences. A painting relating this story from Sulawesi has been commissioned using a traditional Balinese style known as kamasan. Using a style from one part of the archipelago to recount a legend from another part of the archipelago blends the cultures of the two regions, just like the marriage of Puatta Mamuju and Mera’ara Puang did. This painting will be used to illustrate a children’s book to bring this story to the youngest generation as well as their caregivers and teachers. Additionally, there will be an online presentation and videos geared towards the public, tourists and (art) historians. The project’s value lies in its artistic reinterpretation of the legend of Lasalaga; its combined use of traditional and new media; its showcasing the social interactions between different ethnicities and cultures in Indonesia; and its contribution to children’s literature.

The Lasalaga Project is the initiative of KITLV researcher Kathryn Wellen  and culture activist Louie Buana, the founder of the Lontara Project. The painter chosen for the project is I Made Sesangka Laksana of Klungkung.

Artwork from the Kerta Gosa Pavilion in Klungkung. These paintings are done in the Kamasan style, which is the same style as I Made Sesangka Puja Leksana is using to depict the Legend of Lasalaga. Photo made by Louie Buana.