Book launch and debate on Indonesia’s national elections | Democracy for sale: Elections, clientelism and the state in Indonesia | Ward Berenschot | With drinks afterwards! 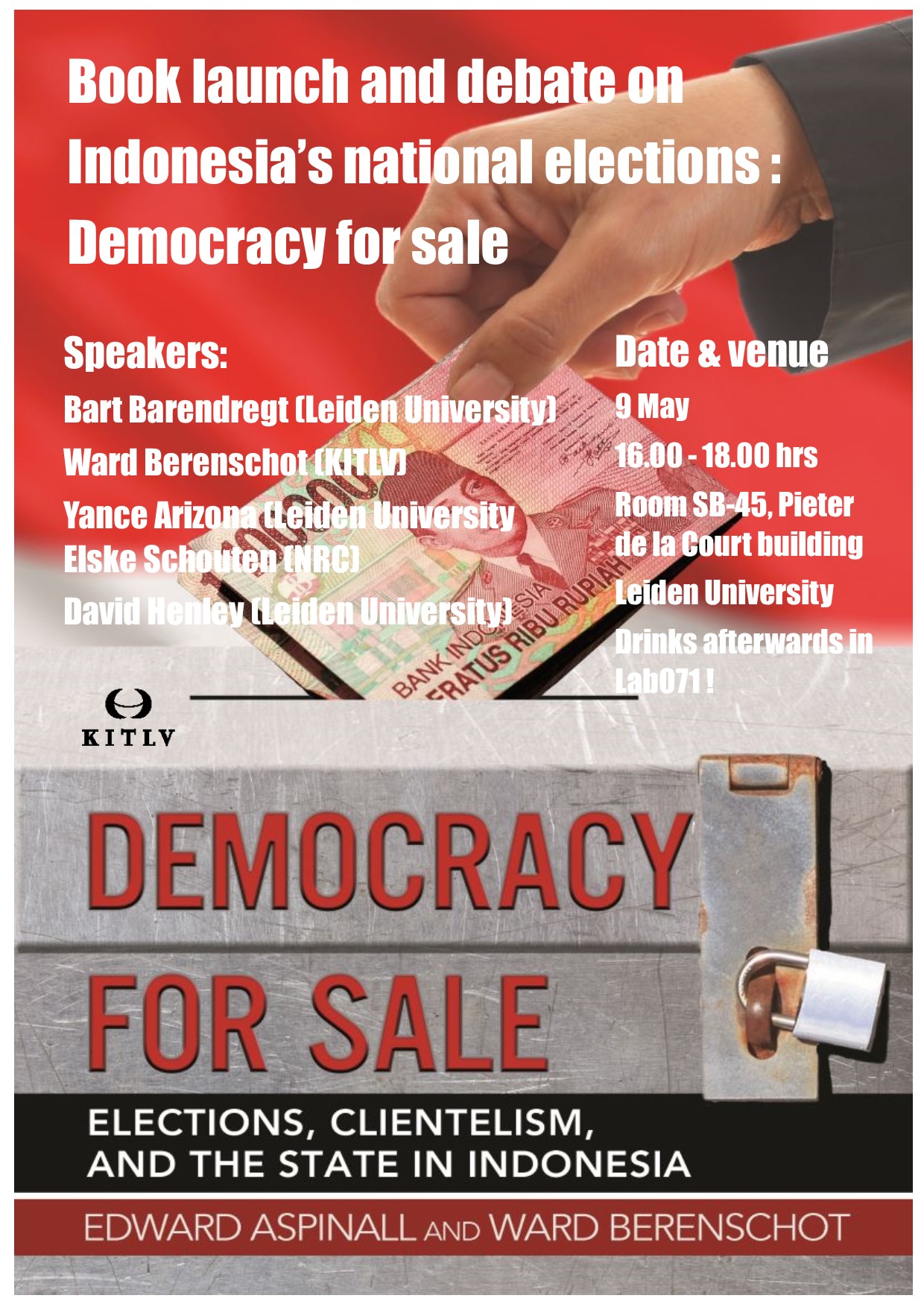 This seminar-cum-book launch will discuss a new book on Indonesia’s democracy as well as reflect on the outcome of Indonesia’s national elections held on 17 april. A panel with Bart Barendregt (Leiden University), Yance Arizona (PPI Nederland, PhD student Leiden University), Elske Schouten (NRC, ex-correspondent Jakarta), David Henley (Leiden University) and Ward Berenschot (KITLV Leiden) will analyze these elections: what do the results say about Indonesia’s democracy? What explains the outcomes and what will be the consequences? This seminar will also be the occassion for the launch of the book Democracy for Sale in which Ward Berenschot and Edward Aspinall (Australian National University) provide an insider account of politics in Indonesia.

Democracy for Sale: Elections, Clientelism and the State in Indonesia
Written on the basis of extensive fieldwork and survey research, Democracy for Sale provides an insider account of Indonesia’s democracy. Edward Aspinall and Ward Berenschot assess the informal networks and political strategies that shape access to power and privilege in the messy political environment of contemporary Indonesia. It shows how at every level, formal institutions are shadowed by a netherworld of personal connections and clientelistic exchanges. Politicians win elections by distributing small-scale projects, cash or goods to voters; they gain the funds they need to campaign by trading contracts, licenses and other favors with businesspeople; and they engage in constant battles with each other and with bureaucrats to wrest control over state resources to fund such efforts. Rather than depending on parties, Indonesian politicians typically rely on ad-hoc, personalized structures called “success teams” to organize their election campaigns. Personal connections – whether based on kinship, friendship, business links, religion or ethnicity – trump party loyalties. Political operatives often effectively auction off their services to the highest bidder. Bureaucrats rather than parties control state resources and are key actors in election campaigns.

Through these arguments and with comparative leverage from political practices in India and Argentina, Democracy for Sale provides compelling evidence of the importance of informal networks and relationships rather than formal parties and institutions in contemporary Indonesia. Democracy for Sale employs an innovative framework for comparing clientelistic polities, and draws on a wealth of direct observations of the shadowy world that lies behind formal politics. It shows that we should see informal politics and clientelism not as deviations from normal politics, but as constituent elements of it – in Indonesia, as in much of the rest of the world.

Book sale
A limited number of books will be sold with discount at the launch for € 20,- per hard copy. If you are interested, please pay by cash.