IS4 Webinar | Is there Indonesian history before 1945? Unconnected histories, and the (near) absence of postcolonial concerns 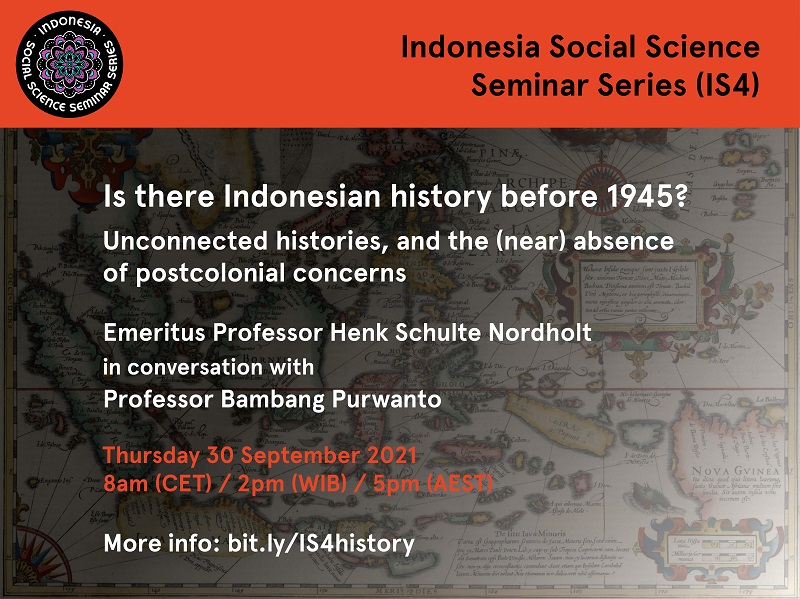 Indonesian historiography is extremely compartmentalized. For most Indonesians their history starts in August 1945, unconnected with the colonial past. This prevents for instance an analysis of the transition of colonial modernity to its postcolonial manifestations, and may explain the near absence of postcolonial debates in Indonesia.

Dutch colonial history shows a reversed pattern: it stops in 1950 and shows no interest in postcolonial Indonesia. Indonesian and Dutch historical interests hardly overlap. Even the period 1945-1950 reveals a wide gap. For the Dutch it was a period of ‘decolonization’ with, currently, an emphasis on Dutch military violence; for Indonesia it was the war of independence with an emphasis on nation-building and state formation. What prevents historians to break through these temporal and conceptual barriers? Would is be possible to identify and explore shared concerns?

Speakers
We warmly invite you to join Emeritus Professor Henk Schulte Nordholt from KITLV, in conversation with Professor Bambang Purwanto from Universitas Gadjah Mada Yogyakarta, Indonesia, to explore the diverse narratives around Indonesia’s pre-1945 history. The conversation will be moderated by Assistant Professor Jessica Soedirgo from the University of Amsterdam.

About the Indonesian Social Science Seminar Series (IS4)
Sponsored by the Sydney Southeast Asia Centre (SSEAC), the Cornell Southeast Asia Program (SEAP) and the Royal Netherlands Institute of Southeast Asian and Caribbean Studies (KITLV), this virtual seminar series brings together social science experts from across the globe to discuss pressing issues facing Indonesia. In addition to providing in-depth scholarly analysis of social issues in Indonesia, this series will foster new opportunities for networking between those working in Indonesia and around the world. More.